Techno, as one of the backbones of dance music, has always been more of an underground style in the total landscape of EDM genres. What attracts you in the genre and what drives you to continue to push the bar?

Do I push the bar? Haha… I guess I never saw myself that way. Well let me start by saying there are a lot of types of techno I really don’t like, but what draws me to techno specifically is it’s energy. I’ve always tended toward the darker sides of music regardless of genre. For rock it was mostly punk, for 60s-70s it’s mostly classic & southern rock, for 80s it’s new wave, for hip hop: it’s rap/top40, for drum & bass it’s jungle/tech-step, breakbeat it’s new school breaks, and for techno, I want it to be TECHNO! Don’t get me wrong, I like tech-house, minimal, deep house, downtempo, classical, jazz and other mellow types of music as well, but there’s something about gritty, driving, toothy techno that gets me going. Stuff that’s stompy with twisted leads and sawtooth basslines. I love that people go absolutely crazy to it. You can feel the energy in the room rise while watching faces contort into this kind of gleeful, painful glow, fists pumping in the air and sweat dripping from their forehead. I feel it. It speaks to me. People dance in different ways to different genres. I’ve taken part in some pretty epic dance sessions to house sets and of course get into some tech-house booty-bouncin’, but no other genre can touch the life that oozes from a room filled with seriously dark, stompy techno. 130bpm. There’s nothing on this earth that makes me happier than playing a set of dirty, screaming techno to a crowd that’s really into it.

I’ve never stopped to think about it before, but I guess that’s it, isn’t it? That moment. That’s what drives me.

Not only are you a talented DJ, but you are also a founding director of Decibel Festival. Decibel has been growing each year to the major league international festival it is now. Are you still involved and how do you like the progress of it?

I couldn’t be more proud of Decibel. There were a lot of naysayers when we started in 2003 (I remember having minor arguments with a couple friends at the time about their negative attitudes) and now it’s one of the most respected music festivals in North America. My involvement has steadily reduced over the last few years, but I continue to help where I can, whether it be graphic support, helping to secure gear or helping maintain sponsor relationships. I’ve been very concentrated on Plasmodium of late, so have switched roles to more of a media partner, helping to promote through previews, reviews and podcast distribution. Plasmodium and Decibel started at the same time, but when I got heavily involved in Decibel I just didn’t have the time to build Plasmodium up in the way I had planned. I miss working as a cornerstone of the Decibel team, but on the other hand stepping back allowed me to finally concentrate on getting plasmodium.net off the ground, and that project has proved equally rewarding.

Do you also produce or do you see yourself more as a DJ?

Definitely DJ. I produce as well, but not very often… I always want to but my life gets so crazy it’s hard to find time to do it all and not go completely insane (or have my body shut down completely). I’ve got a few tracks “finished.” When I have enough to fill a demo CD I’ll start shopping them to labels. If it was possible to make it as an international DJ without producing I might not even produce at all. I love to DJ. I love making people dance and I love the puzzle that is programming a set on the fly. I would DJ exclusively if I could maintain my current lifestyle doing it! That’s the dream, though, right? You are the co-creator of KRAKT which is responsible for a series of techno events in the Seattle area. Describe the feeling of KRAKT and its mission?

KRAKT was created in 2004 because there weren’t any *real* techno nights in Seattle. Loads of tech-house, but no true techno. The aim was to be the iconoclast to the typical Seattle laid-back and passive demeanor. It’s supposed to be in-your-face and unforgiving, just like the techno that’s played there. The marketing for it just sorta happened organically. I don’t quite remember where the bunny came from or how the whole KRAKT Monster voice started. While trying to decide on how to portray the energy of the night my ex-partner Paul Edwards wrote a manifesto that was so outrageously awesome I put it on a flyer. In years and years of promoting it’s the only flyer I’ve ever had to regularly check back in on stores to restock. We had them out at Re-Bar (where the night was held at that time) and every time I came to Re-Bar (once or more per week) they were out. That’s just crazy! Now that we’ve re-launched we’re going to put it on a poster. I’ll be sure to have leftovers to give away at KRAKT so people don’t pull them off poles!

Do you enjoy participating in competition?

Competition is good for growth. It’s good for motivation, and getting you to do things you probably wouldn’t ever get around to. I’m don’t have a competitive personality, but I do get competitive from time to time… but now that I think about it, it’s more of a “They are out there doing that, what’s my problem?” sort of motivation. Overall, though, I guess I do. I also enjoy participating in competitions. After winning The Battle Of The Mega-Mixes two years in a row, they wouldn’t let me compete anymore. Boo! I wanted someone to step up their game to unseat me! Sometimes you fly higher when there’s a high target to jump to. It helps everyone all around… as long as you don’t let it consume you and start behaving like an ass because of it. I’ve seen that happen to a few people and it’s not pretty. If I ever start being a jerk I hope someone would take me aside and smack some sense into me. Rock Star Syndrome is an ugly, ugly thing. What do you do to try and give your best, be the best and maintain your best?

Oh god, is this the part where I admit how lazy I am? hehehe… um… I don’t really? I don’t even know what that means! I guess I just love what I do and that is it’s own motivation. I just don’t think about it. I guess I just always want to get better, be better, and the only way you can achieve that is to keep doing.

I suppose there’s one method I’ve used, though. Recording my sets. It’s hard to hear where your weaknesses are while you’re playing. For a while I brought a digital field recorder to ever gig I had and listened to the sets a few days after. I discovered my programming wasn’t at the level it should be, so I started being more cognizant of how I put tracks together and I got better. My programming still isn’t always perfect, but I also like to take risks and challenge myself to mix things that are difficult to play together. That’s one reason I love playing sets that span BPMs and genres, like playing house, hip hop, 80s and pop all in the same set. It’s also why I didn’t play minimal for very long. It didn’t matter what you played, it all worked without me having to think about it. Formulaic. Where’s the fun in that? Top 3 of regular podcasts you listen to?

Plasmodium, obviously. I also listen to the XLR8R podcast frequently and listen to a smattering of label-produced podcasts, like From 0-1, Get Physical and Hospital Records. One of my favorite podcasts is the Wire Tap show from Jonathan Goldstien. Not music, but that show is highly entertaining and sometimes I get musiced out and just need a break. Lots of NPR gets listened to in my car. Can I get a “Wait, Wait, Don’t Tell Me”?

What is your favorite city to play at?

Los Angeles. I’d like to get another shot at playing Medellin, though. It was clear I wasn’t the best booking for that night and this was before Serato when I have nearly my whole music collection with me wherever I go. It was what I assumed was a techno night and I was booked to play house. That didn’t go over well. Ironic since these days I’m known more as a techno DJ…

Could you describe the ultimate place for a techno event or show? This can be an existing place or a fictional one. Give an example.

The opening scene of Blade. I could do without the blood being sprayed all over everyone, but the venue was awesome. A subterranean, centuries-old basement club that’s dark, dirty and loud? Yes, please! If I could find a place similar to that in Seattle, that’s where KRAKT would be. Entering through a freezer door would be pretty rad, too.

What defines success for you?

Success is when you can find joy in all facets of your life. When what you do for money is something you would do even if you didn’t get paid for it. When you are accomplishing things you can be proud of on a regular basis. When you can stop taking and start giving. That’s success. What is your choice of booze?

SCOTCH! The peatier the better. But that’s a sipping drink, so when I’m out I generally drink bourbon. Or vodka.

HA! I don’t know. A suicide girl? The term “bitches” actually never referred to girls per se. A couple friends and I would use it in place of “dude” or “man”, whether you were talking to one person or many. Say I ran into a friend shopping at QFC. The greeting would be “Wuddup bitches?!” I always like using it when speaking to a single person. It humors me 🙂 But hey, I enjoy looking at beautiful women as much as the next guy! Who’s gonna say no to that? Bring on the suicide girls bitches!

Is there any genre of EDM you would never play?

Trance. Of any sort. And happy hardcore *shudder*. Most of the rest I already play (or have played) in one form or another.

Um… I dunno… maybe… Go to KRAKT! Listen to Plasmodium! Go to Decibel! Treat yourself like you would treat the people you admire. And don’t be a douche 🙂 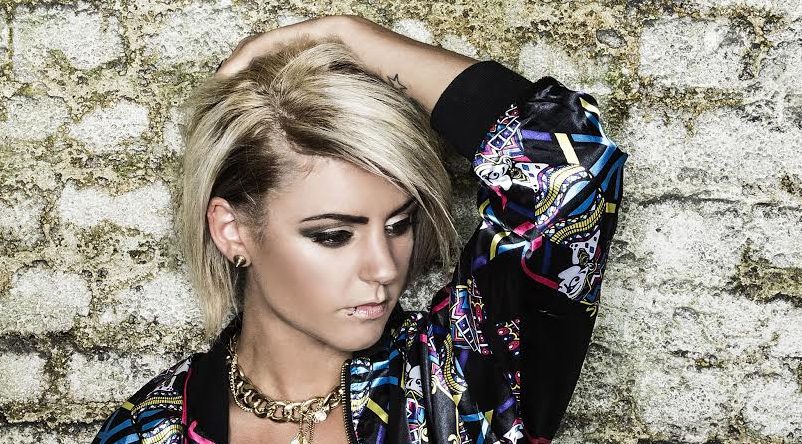 JUST IN TIME FOR FESTIVAL SEASON Give In To The Dark side With Dub Mechanics?